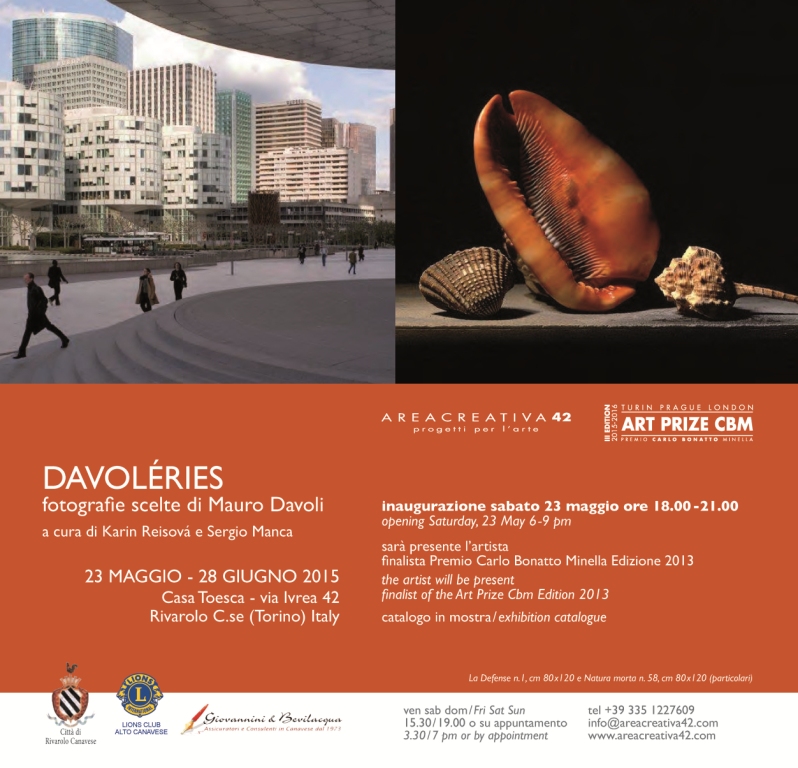 opening on Saturday 23rd May – the artist will be present

Areacreativa42 presents at Casa Toesca, from the 23rd of May to the 28th of June 2015, a selection of works by the photographer Mauro Davoli, a finalist of the 2013 edition of the Art Prize CBM – Premio Carlo Bonatto Minella. The exhibition, curated by Karin Reisovà and Sergio Manca, is a part of the project  ”Young Curators” and offers a journey through images chosen from four different series of the artist: the Shells, La Défense, Burano and Transfers. The exhibition aim is to give a broad vision of a particularly eclectic decades-long career built with a strong intellectual approach, but without redundant intellectualism and dominated by love and a sincere exaltation of pure beauty.

The fascinating series of shells is part of a larger project on still life, inspired by the Flemish and Dutch art of the seventeenth century and in particular  by the painter Adrien Cohort. The composition of the shells and their illumination, that let them emerge from the darkness of the background, are immediately imprinted in the eye of the observer, with the addition of an elegant game of references, divided between educated quotes and conceptual paradoxes.

The visual culture of Davoli is the starting point for the series, developed over many years but exceptionally homogeneous, dedicated to the painted walls of the island of Burano. Once again,the eye of the photographer is ready to identify tiny details and extremely elegant in the choice of color combinations. Like abstract paintings, these images always reveal the multi-dimensional nature of the objects, thanks to the discrete presence of a shadow, the rising of a crack or the  intermittent vibration of plastered surfaces.

The long experience in architectural photography is the basis of another cardinal point of Davoli’s art, as evidenced by the series of photographs that represent, in an almost Renaissance Paris, la Défense. Its perspective symmetries  dominate the  view of what we might call a modern ideal city, which, even today, seems shrouded in the cold atmosphere of a sci-fi set.

The last part of the exhibition will be devoted to a new series, called Transfers, obtained through a special process of development, transfer and print from a Polaroid film. Through this technique the artist represents skulls of animals depriving them of any harshness, but dominated by an elegant aesthetics. These works show another fundamental characteristic of the artist’s career: a tireless journey of experimentalism, started in his youth and never abandoned.

Exhibition organized with the support of the Lions Club Alto Canavese. 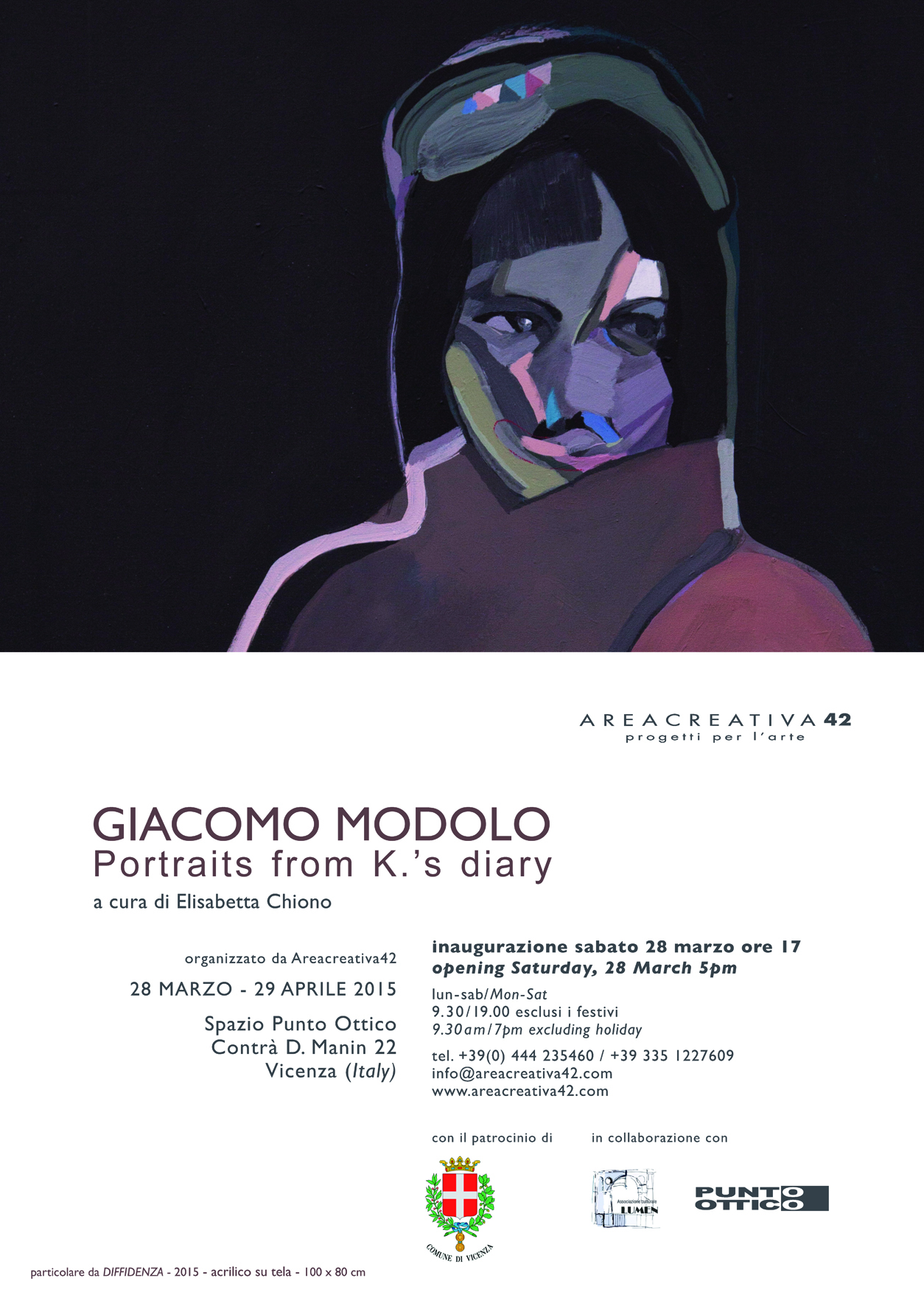 Portraits form K.’s diary is an exhibition part of the Young Curators project of Areacreativa42 and comprehends an unpublished series of paintings by Giacomo Modolo. Based on the memories of a young Karin in her early years in ex-Czechoslovakia and later on, in the Seventies, in Italy, the young artist from Vicenza has reworked and interpreted “someone else’s life”, but at the same time the experiences of many others.
The stories Giacomo was told are centred in the years of Prague Spring of 1968, when a Mitteleuropean and culturally active Prague suddenly becomes a country “on the edge of desperation and resignation” (Jan Palach). With the soviet invasion Karin’s family, like many others, is forced to seek for political asylum in Italy.

The tanks are ready as hawks for catching preys
the words are running on people’s faces
sorrow is running and burning every street
and every wall in Prague is launching cries.

In its ancient luxury still dressed
the square looked at his new life, grey.
Night was drawing near, as every day,
the walls of Prague did show usual words.
…

Her childhood continues in a very different country compared to Czech Republic and the memories of those years slowly resurface in the mind of an adult woman, more and more vivid.
Giacomo describes this project “a meeting of fate, a synergy that facilitated his artistic journey that joins a real life one”.

The centrality of the past life of the interlocutor, however, doesn’t lead him to represent her intimate and personal sphere as it was narrated, but he used it as a source of inspiration instead, a starting point to develop a thematic work dominated by spaceless shapes, a typical characteristic of the artist’s previous production, particularly centred on the historical events of the ‘900.
Giacomo links together stories, photographs and particulars discovered during his trip to Prague with imagined circumstances, recreating a universal representation of events, places and people that look at us from the canvas, leading us on a temporal journey.
The artist achieves his goal: a dialogue between the representations and the observer. Painting doesn’t become an end-in-itself, but awareness, and the exhibition-project allows for a sharing experience left to the sensibility of each observer.
A work above the others, particularly important for the artist, “Victory of/on people” takes inspiration from the visit of Prague and of the ironic statue of David Cerny inside the Kavarna Lucerna where St. Wenceslaus, patron of the City, has been represented riding an upside-down horse. Mariusz Szczygiel wrote: “The Czech Republic national symbol lost his horse”, meaning that there is never peace, there is no winner nor loser, in the past as well as in the present and Giacomo clearly represent this thought. Not only referring to Czech republic but to all the Countries.
In the same way the “countryless” flags represented in the works underline the historical cicles of history, which continuously repeats its own mistakes without granting a truce to humanity.
To complete the project, several extracts from the novel that the writer Ilaria Polastro is completing taking inspiration from Karin’s notes and memories have been included in the catalogue. 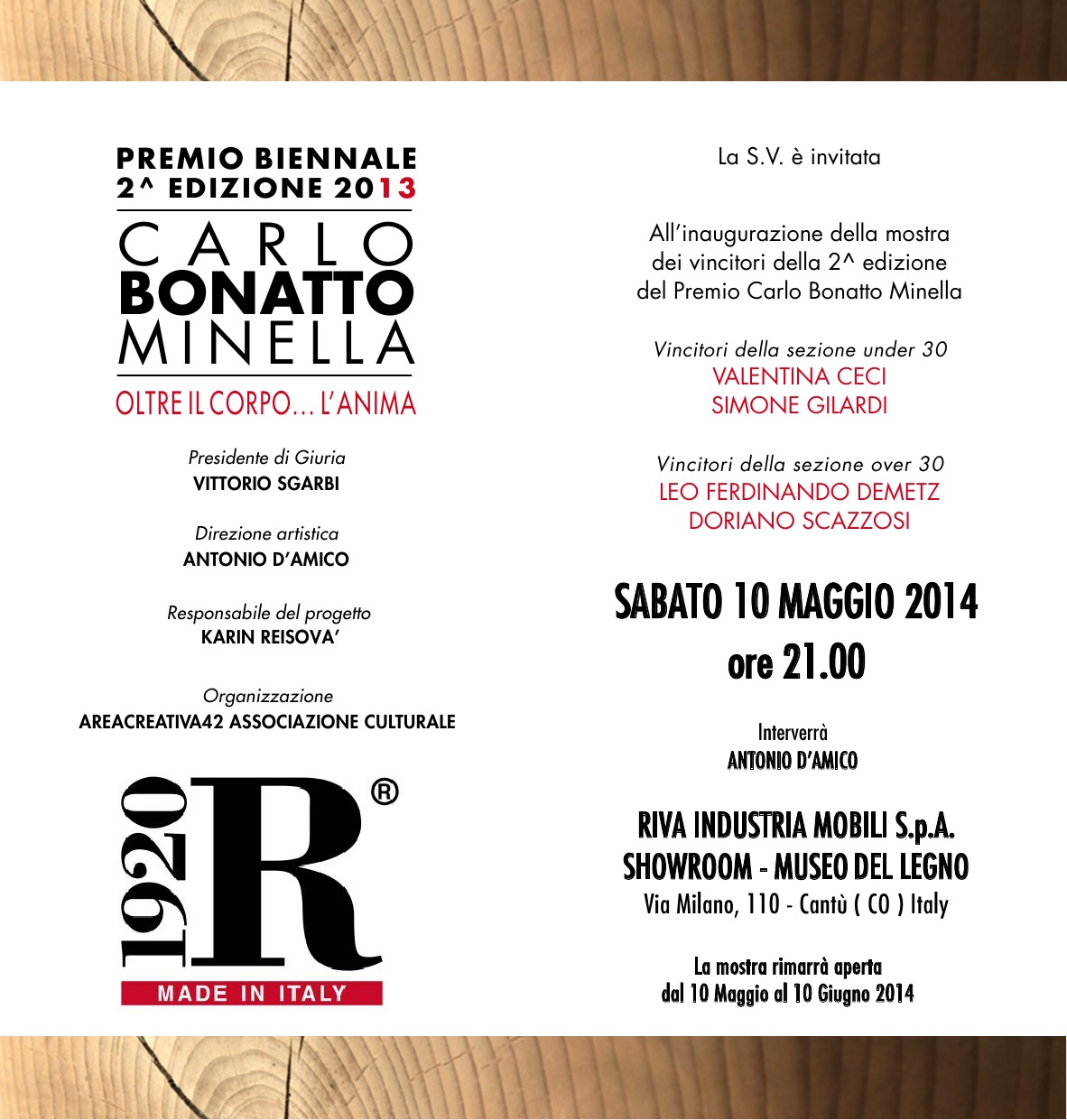 Characterized by an apparent falsification and deconstruction of representation, the works of Giacomo Modolo actually depict subjects and objects which have a vivid spatial and figurative concreteness.
The artist expresses himself in a synthesis of shapes and colors that gives life to human figures contextualized in environments without visible references, a result of the imagination and insight of the artist.
This leads to a materialization of thought that manifests itself first with the design, through what he calls the “sign”. Following the painting, that gives shape and volume in a perfect balance, capable of representing the internal dynamism of the composition.
The subjects are moving within the painting, in a conscious elaboration and representation of stories, experiences and memories that have been narrated and subsequently reinterpreted in the contemporary world.
Themes such as war or fascism are the subjects of the paintings, although moments that the artist didn’t personally live but that he wants to represent at all costs, and he does with incredible clarity, in an atmosphere of realism and strong sense of the dramatic experiences depicted.
The role of the artist is transformed into the ambivalent figure of a passive interlocutor, but also of an active novelist who makes, with the images, the others participant of what he has been told or shown.
The movements and postures are heavy, so are the bodies, the blurred faces hypnotic, wanting to be looked at. We’re inevitably spectators of their experiences.
The exhibition is a journey into the past, into the experiences of individuals becoming, a bit at a time, knowledge of a present moment and a lesson for the future, so that the historical memory continues to live again.
The result of the artist’s work is nevertheless of great freedom, supported by deep thoughts.
The strong introspective of Giacomo and his growing career, have convinced Arecreativa42 to make this exhibition part of the project “Young curators”.
Interest in his work had already been detected during the 2013 Carlo Bonatto Minella Art Prize organized by Areacreativa42 and with Vittorio Sgarbi as president of the jury when, among more than 800 artists, Giacomo was selected as a finalist in the under 30 category with the work The truce. 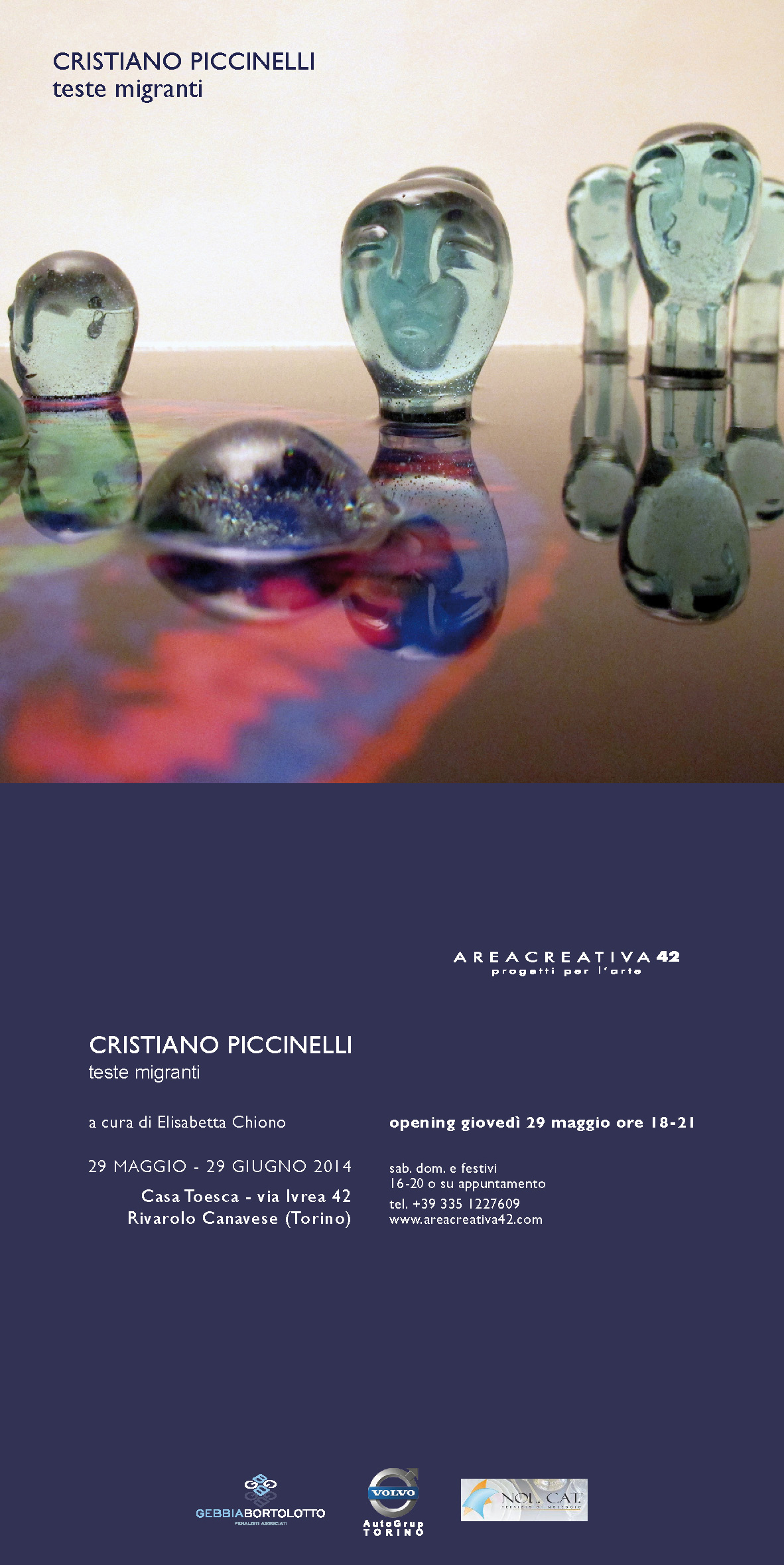 Areacreativa42 welcomes the sculptures of Cristiano Piccinelli , that will populate, animate and enliven the exhibition space.
The title of this exhibition is Migrant Heads, recalling the work of this artist from Turin, who’s been busy for years to complete his research with the creation of small modular heads, that can be assembled in sculptures or installations either in resin, clay, bronze, ceramic or silver.

The result?
A series of works that transport you to a timeless journey, extremely realistic, but also ironic and engaging. A path made of many small heads, each different from the others, which tells of individuals and of their relationships.

In everyday life the relationships between people are often complicated and disappointing, filled with former delusions that make us unwilling to fully trust each other.  Cristiano represents these feelings through his sculptures, finding what he calls a sense of freedom and loss of self consciousness.

Looking at his sculptures we’re pervaded by the feeling of a unique current, of an understanding between individuals despite their diversity, and of a research that, however, doesn’t have an ending point.

There’s indeed a starting point with the site specific installation in the opening, catalyzer element and fulcrum of the exhibition-project, that leads to the first sculpture: migrant heads. From this work we can find the little heads and their path to an undefined destination, forever unreachable.

Visiting the exhibition an empathic link between the sculptures and the observer naturally arises, in such a way to create a condivision of intents, a paradoxical reflection of their space into ours or, why not, the other way around.

The titles of the works help even more to understand all this, to hint the goals of the little heads and their prearranged fate: nomina sunt consequentia rerum.

Every single individual on show is different from the others, each one telling his own story through his sculpture and listening to us in a different way and giving us a bit of irony and enjoyment: most likely that sense of freedom described by Cristiano.

The collaboration of Areacreativa42 with the solo show by Marco Bocci “Clouded Prospects  ” comes from a series of events and circumstances in progression and from the profound belief in the importance of creating a network.

I didn’t know in depth the career of Marco Bocci, but the enthusiasm of the curator  and friend Enrica Piacentino  involved me immediately in this project.
Gradually began an exchange of ideas, suggestions, sharing and reflection. Enrica showed me the photographs of Marco, the expression of which is his way of being , the unknown to the public. Looking at the pictures it seemed to participate in the time of shooting , I had the feeling of having already experienced and to be with the artist looking at the same goal.
What struck me about Marco was the desire to go on tiptoe , quietly, not taking advantage of the media coverage that he could still have , but separating the roles. On one hand, the actor and on the other the photographer . On one hand, an artist who expresses his character and personality of the actor and on the other an artist who expresses the deepest part of himself in intimate relationship with the spaces that surround it, without spectators.
I accepted the proposal of Enrica to involve Areacreativa42  for the seriousness and commitment with which she curated the exhibition, sharing the energy and the way of working.
Areacreativa42 has always been involved in initiatives with a strong mold and cultural level . It is established in eighteenth-century Casa Toesca in Rivarolo Canavese (Torino), and supports young artists, in a journey that has seen with the guidance of the President , Karin Reisovà , the realization of exhibitions and characterized by a solid design and a artistic level to excellence and, most recently, the Second Edition of the Carlo Bonatto Minella Art Prize of painting, sculpture and photography with the jury president Vittorio Sgarbi.
In the course of Karin Reisovà engages and joins today mine too, giving rise to new initiatives and collaborations with young curators who are entering into the art scene as Enrica Piacentino..
Thanks Enrica and thanks Marco
Elisabetta Chiono