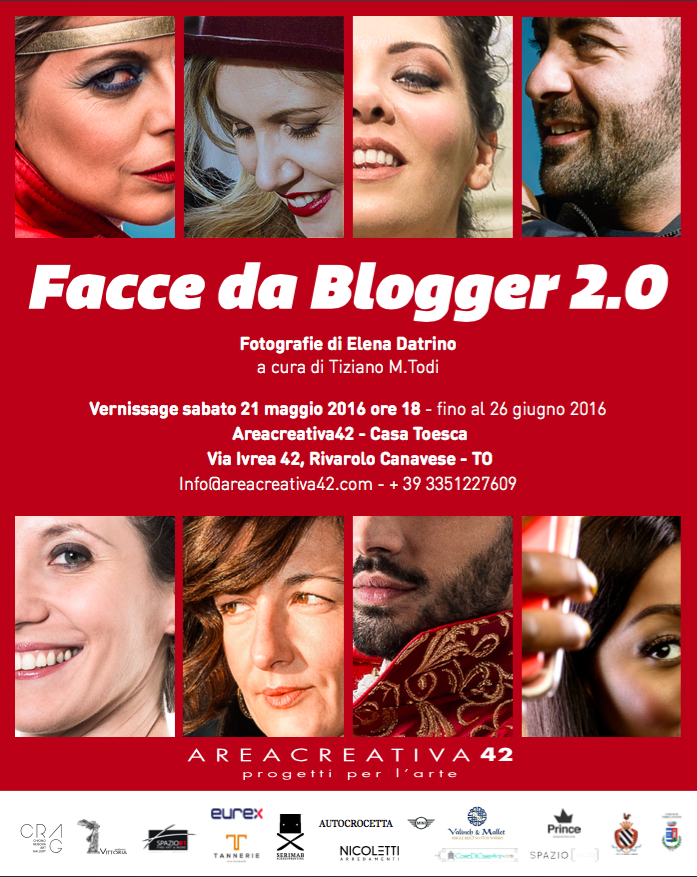 Hosting the exhibition “Facce da Blogger 2.0” at Areacreativa42 meant creating an interaction between two distant worlds: the physical, quiet, silent, meditative one of the ancient rooms of Casa Toesca and the virtual and colourful one of the blogs. For us at Areacreativa42 looking for contrasts and valorising the end results with all its artistic vibrations is not new, but new is instead the idea “Let’s give bloggers a face”!

This project was born after an original idea that photographer Elena Datrino had and developed into an im- portant work that today is in its second edition. The artist established a dialogue with different bloggers, and its result lies in the shots exhibited, that reveal and emphasise certain sides of each blogger’s personality whose posts are known but its actual face is not instead.

All the followers of the most famous bloggers are invited at this event capable of uniting these two worlds. The artist is able to somehow create a link between two different realities and its ability is to present the identities of the bloggers in pictures and spaces that are always borderline with everyday life. She unveils them in a scenography where humour is ever present. It is a community made of creative people and the exhibition then becomes a party thanks to Elena’s ability to involve and transform into protagonists all those who decided to take part to her project.

Casa Toesca fills with a sparkling energy and as Tiziana Todi of Galleria Vittoria of via Margutta, Rome, who hosted the first edition of the exhibition, said, the project “is a journey touching different personalities, based on the playful meeting between who makes the portrait and who decided to be portrayed…”

We believed in Elena Datrino’s project, we let ourselves being transported into the world of bloggers and the result has been truly amazing and ready to join the internet!