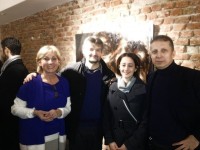 Beyond the body … the soul
Stage II – Gallery Hernandez Milan

” The Carlo Bonatto Minella Art Prize becomes more usefully an exhibition of findings , proposals, research, artistic in a situation difficult for the excess of creativity, but often that requires respect for the dignity, care and also the difficulty of choice. The competition extends the knowledge and indicates a need, an inner urge that moves many to express themselves and move. The age , with such difficulty , is rich and fertile . ”

These are the words of Vittorio Sgarbi, president of the jury of the Second Edition of the Prize Carlo Bonatto Minella , dedicated to painting , sculpture and photography , organized by Areacreativa42 Rivarolo Canavese (TO) .

The award, conceived and strongly backed by Karin Reisovà , president of Areacreativa42 , saw 823 works accepted in the competition of domestic and foreign artists , who developed the theme “Beyond the body … the soul “, chosen for this Second Edition , with deep introspection and personal interpretations of the theme.
Strong images proposals vital and intense bodies and faces. In approaching the topic choice emerges a mature representation of young artists , and even a proposal aware of those already established .

A special jury, chaired by Vittorio Sgarbi, has decreed, in addition to 40 finalists and two special mentions of the president, four talented winners.

For the category over 30 years, sculptor Leo Ferdinand Demetz and the painter Dorian Scazzosi , and for the category under 30 years old, Valentina Simone Ceci and Gilardi . The four artists after the show opened last November in the eighteenth century rooms of Toesca House , home of Areacreativa42 , will exhibit their works in the space of Galleria Hernandez , in the heart of Milan, from 23 January 2014 to March 8, 2014.

” The looks deep and intense portraits of Valentina Ceci and Simon Gilardi , the lightness of Leo Ferdinand Demetz and the emotional power of Dorian Scazzosi ,” as quoted in the catalog Antonio D’Amico , artistic director and member of the jury, will therefore be presented to the public in Milan.